In order to interpret the total energy of nucleons, we need to introduce a zero level of energy. Consider the energy of a free nucleon, which is left alone, to be zero. In comparison, the particles that make up the nucleus have two energy components:
- the potential energy associated with the bound state of the nucleons, the "boundness" to each other, which is of negative value,
- and kinetic energy, which is always positive.
The sum of these is called the total energy \((E)\) of the nucleons that make up the nucleus.

Since the absolute value of the potential energy is greater than the kinetic energy, the total energy as their sum is negative. It's like the nucleons are mice, fallen into a pitfall, and despite running and pushing, they can't get out of it. Note that total energy should not be confused with "total relativistic energy", i.e., the product of \(mc^2\)! The energy invested in overcoming the "glue" holding together the nucleus, while breaking apart it into nucleons (the work done during this process), is called binding energy \((E_{bind})\). Its value is positive, equal to the negative of the total energy of the particles that make up the nucleus: \(E_{bind} = –E\). 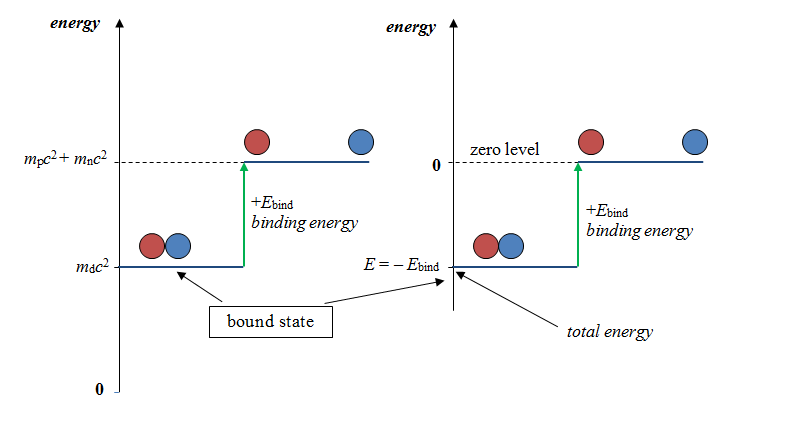 For a more thorough understanding of the concept of total and binding energy, consider a system of two nucleons (one proton and one neutron) as shown in the figure!
Very often, however, it is not practical to compare the energy of a system to "nothing". In many cases, it is more practical to compare the transformation of energy to the state of already “created” but still free components. In other words, this means placing the zero point of the energy scale somewhere else than before. The zero level will not be set at "nothing" but at the "non-bound" system (upper part of the figure on the right). If in the "new" coordinate system a bound system is formed from free particles of energy 0 (by bringing the proton and neutron so close together that the strong interaction can take place), then the gamma photon leaves in the same way – and some of the energy. Thus, the energy of the deuteron system will be negative \((E = –2,2 MeV = –E_{bind})\).

The total energy (E) of the p-n system is the sum of the potential and kinetic energies of the nucleons. In the “new” coordinate system (on the right), the (total) energy of the particles is \(-2,2 MeV\), but this is a combination of approx. \(-40,2 MeV\) potential and approx. \(+38 MeV\) kinetic energy. – The situation is very similar for gravitational systems: for example, for binary stars or for the Earth-Moon pair. In this case, due to the "circular dance" of the celestial bodies, significant kinetic energy is present in the system beside the potential energy (\(-f\frac{m_1m_2}{r^2}\)). However, there is a significant difference between the particles that make up the nuclei, and mice running in a pit (or the circular dance of celestial bodies): nucleons do not move in the classical sense. So, how come they have kinetic energy? - The particles are "squeezed" in a tiny space (similar to electrons enclosed in an atom). Thus, the nucleons that make up the nucleus must be treated as a quantum mechanical system: they take on a standing waveform in the nucleus. The center of mass of each nucleon is stationary but has (discrete) kinetic energy as a standing wave. Thus, nucleons are "dual in nature" (particles or waves, depending on the circumstances) just like photons and electrons.
Note that, the proton-neutron fusion described above takes place in the \(^1H_{atom} + n \to ^2H_{atom} \) process - for example in the cooling water of nuclear reactors. Measurements can detect the \(2,2 MeV\) gamma radiation generated by the reaction.